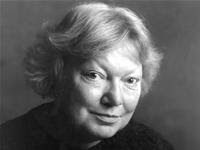 Inger Christensen has what I would call a "structural imagination." She--like a few others such as Louis Zukofsky and Ronald Johnson--likes to create elaborate structures, complex verbal cathedrals or temples within which she can place her quiet hymns.

Christensen is a Danish poet, famous in Europe for her experimentations, but like most European poets, unknown here. She died in 2009.

I came across her through a translation of part of her Alphabet in Volume two of Poems for the Millennium edited by Rothenberg and Joris. It struck me as an incredibly beautiful hymn to existence. I went to Amazon and purchased a copy. This is the beginning of the section for the letter L:


[this from the translation by Susanna Nied, New Directions, 2000]

Each section of Alphabet keys on a letter A through N. The length of each section is determined by the Fibonacci sequence in which each number is the sum of the two previous numbers. The poem is not only a great hymn to existence, but a plea for existence. As she notes not only trees and kingfishers but, "The atom bomb exists," "the hydrogen bomb exists" as do war and pollution and poverty.

I have also read her it, another massive and complex architecture within which swells a hymn to creation.


[Also translated by Susanna Nied, with an introduction by Anne Carson--in interesting poet and translator in her own right]

I love the "structural imagination" of her poems, the creation of new forms and verbal games. I actually believe such structures enhance and enrich poetry, but that is a discussion for another day. Even more I love the depth of her humanity and her sense of the beauty and mystery in the world around her.
Posted by spconger at 9:16 AM No comments: