China Mieville is an author who has been on my reading list for a long time. He came recommended by friends and by many reviews. I finally decided to take the plunge. I read his three most recent novels. Brief reviews follow. He is as good as his reputation. His novels are strange, intriguing and often beautiful. 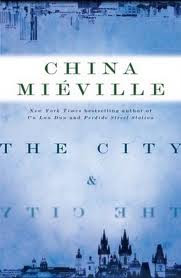 The City The City

Think of Berlin before the fall of the wall. East Germany separated from West Germany, each half of the city with separate politics, economics, destinies. Now imagine a city just as divided as Berlin was, but with the wall existing purely in the mind. The citizens of one city are walled off from the citizens of the other city by a reinforced habit of thought. Each citizen carefully "unsees" the citizen of the other city, even while avoiding the vehicles and pedestrians of the unseen city. Clues in clothing styles and architecture help with the unseeing, and a secret police force called "The Breach" enforce the separation.

The story begins with a murder investigation: a prostitute, seemingly, dispatched and then dumped in a garbage filled lot in one of the cities. It seems a simple case, but a couple of things don't add up. The chief investigator is too good to let it go. He follows the leads to find links to a revolutionary movement, a possible breach and the conspiratorial myth of a third city that somehow exists in the interstitial boundaries between the other two.

In many ways this novel is a classic detective story, but with an underlying strangeness that gives it an odd, somewhat disturbing beauty. 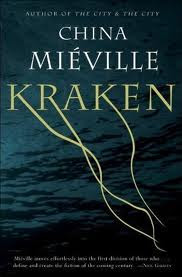 There is a secret London, filled with cults and strange religions each with their own gods and their own particular apocalypses. There are also, in this secret London, people with Knacks and powers. All are on edge because a giant squid has mysteriously vanished from its display in the Museum of Natural History. Somehow this disappearance is a preamble to a total apocalypse nobody wants.

The protagonist of the novel, Billy Harrow, is a curator in the section of the Museum that housed the squid. After its disappearance, he is sequestered by a squad of police who specialize in cults. He escapes to find out for himself what is going on. He quickly finds himself immersed in the secret London underground and especially in the cult of the Kraken itself.

In many aspects the novel reminds me of the work of Neil Gaimen, especially Neverwhere. In fact it often seems like an attempt to out Gaimen, Gaimen. That being said, it is an enjoyable novel. The cults and religions are intriguing. There is suspense, humor, and occassional flashes of poetry 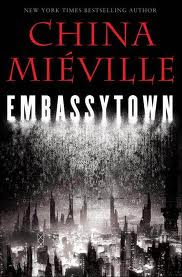 Of the novels reviewed here, this is the most complex and interesting. It is about "Language" both literally and metaphorically. The novel takes place on a planet at the edge of navigable space. The atmosphere is toxic to humans, but the aliens, known to the local human population as the Hosts, have made an area livable for human colonists.

The Hosts speak "Language," a very peculiar speech. For one thing, the Hosts have two throats and speak simultaneously through both. The Host can only understand language spoken by living sentient beings., Recordings or synthesized speech are incomprehensible to them even when it reproduces the sounds of words perfectly.Secondly, Language can only express factual statements. It cannot express contrary to fact conditions. There is no "what if." Language cannot lie.

Humans have created genetically engineered clones called ambassadors who can speak simultaneously and be understood by the Hosts. The Hosts too have tried to expand their Language to communicate better with the outsiders. The use real people, set up in situations that can be used as similes--metaphore is beyond them.. The narrator of the novel is such a person. As a child she was used to create the simile, "she who ate what was put in front of her."

Language is visceral to the Hosts, so much so that a new ambassador's voice accidentally becomes an addictive narcotic. To free themselves from it the Host must either horribly mutilate themselves or learn to lie.