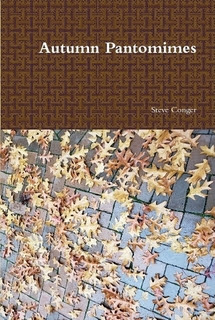 I have just published Autumn Pantomimes, my fifth book of poetry. I like this one a lot. Autumn has always been the season when I return to myself, when I am most energetic and alive. After the sluggish stupor brought on by August and September heat, the return of the clouds, the coolness, the breeze through the changing leaves stirs my mind back into a more creative mode.I like spring with its returning green and promises, but the sadness of autumn has always seemed more like home.

I like my other books too, though perhaps not equally. I worry that One Nine Twelve Three is too much a collage of modernist and postmodernist philosophy texts. I worry that it is too male and too white. I like the first section quite a lot, and Three, I think is quite good. I think Nine and Twelve are uneven with good and not so good. The book fulfilled several architectonic notions I had been playing with for decades, and so is an accomplishment in that way.

Of the 52 sonnets Fifty Two, I would say about a third of them are quite good. I kind of wished that I had written the sonnets over a run of say 5 years and then chosen the best from the lot rather than publishing each one I wrote. The virtue of the way that I did it, if there is one, is that it provides a diary of a very distressing year.

Etudes I am proud of. It represents decades of work in reading and translating ancient Greek. I think the quality and variety of the translation are good overall, and by the last bits that I was adding, particularly the epigrams on Heliodora, I was reading the Greek with as much fluency as I ever had. Unfortunately, no one seems much interested.

Outrages was another experiment in form and journaling. The structure of each poem reflects the date on which it was written. Each poem begins with a stanza of 17 words for the year 2017. The next stanza has 1 to 12 words representing the month. The third stanza has 1 to 31 words representing the day.This form was much more flexible than the sonnet, and, since I was doing one each day, I had 365 of them to choose from. I chose a little over half of them for the book.

Currently I am working on an SQL textbook for Franklin Beedle. I also have, as usual, too many poetry projects. I have at least three that I am working on now, and a fourth that I may start soon. But more on that later.