Took a long walk yesterday and walked down along the Mashell river which flows along the borders of Eatonville, taking pictures with my cellphone. I was thinking I might use one for a new web site I intend to build.

Here is one of the pictures: 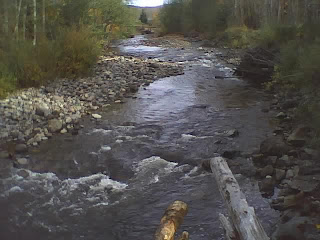 In terms of work, I have finished all the appendixes except one of Visual Studio. I am not sure I should use the Beta. Ultimately Microsoft doesn't allow screen shots from Beta's to be published but I could use them as placeholders. The other thing that concerns me is that the ASP.Net changed a great deal between Beta1 and Beta2. I worry it may change even more before the final version.
I may leave it for now and begin rewriting the chapters.